DISCLAIMER: This Health Library is for educational purposes only and does not necessarily reflect the services provided by this practice/facility.

Crohn disease is a severe, chronic inflammatory bowel disease. It causes inflammation, ulcers, and bleeding in the digestive tract. It usually affects the end portion of the small intestine called the ileum. However, any part of the digestive tract can be affected, from the mouth to the anus. 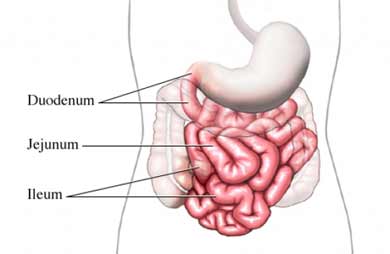 The cause of Crohn disease is not known. Inflammatory bowel diseases such as ulcerative colitis and Crohn disease, tend to run in some families. Some researchers think that it is due to a reaction to a virus or bacteria that causes the immune system to overreact and damage the intestines.

People of Jewish heritage are more likely to get Crohn disease. Your risk may also be increased if you have family members with inflammatory bowel disease or other autoimmune diseases.

Complications of untreated Crohn disease may lead to:

You will be asked about your symptoms and medical history. A physical exam will be done. If you are diagnosed with Crohn disease, testing can be used to monitor the disease and assess complications.

Imaging tests evaluate the intestines and surrounding structures. These may include:

A biopsy may be taken during some of the these tests. A biopsy is a sample of the intestinal tissue that can be examined under a microscope.

Your doctor may advise that you avoid foods that trigger symptoms. These foods are different for each person. They may include:

There are many types of medications that are used to treat Crohn disease. Examples of these medications include:

Very severe Crohn may not improve with medications. You may be advised to have the diseased section of your intestine removed. The two remaining healthier ends of the intestine are then joined together. You are still at high risk for the disease returning.

Surgery may also be done if you have an obstruction or fistulas.

Women may be able to reduce their risk of Crohn disease through exercise. Talk to your doctor about an exercise program that is best for you.

This content is reviewed regularly and is updated when new and relevant evidence is made available. This information is neither intended nor implied to be a substitute for professional medical advice. Always seek the advice of your physician or other qualified health provider prior to starting any new treatment or with questions regarding a medical condition.