The da Vinci® Surgery System provides our surgeons with an alternative to both traditional open surgery and conventional laparoscopy, putting a surgeon’s hands at the controls of a state-of-the-art robotic platform. The da Vinci® Surgery System enables surgeons to perform even the most complex and delicate procedures through very small incisions with unmatched precision.

It is important to know that the da Vinci® Surgery System does not place a robot in control of your operation. Your surgeon is controlling every aspect of the surgery with the assistance of the da Vinci® robotic platform.

The da Vinci® Surgery System may not be appropriate for every patient. Always ask your doctor about all treatment options, as well as their risks and benefits.

Patient benefits of da Vinci® robotic surgery may include:

Learn more about da Vinci® surgery through the eyes of patients.

Surgeons at Doctors Hospital may use robotic-assisted surgical technology to perform a variety of surgeries. The da Vinci® Surgery System can be used to perform the following surgeries:

Surgery is an effective option when medication and non-invasive procedures don’t relieve symptoms of gynecologic conditions. Our surgeons perform da Vinci® gynecologic surgery to treat a variety of conditions. In fact, Doctors Hospital was the first in Augusta to perform a hysterectomy via belly button with da Vinci®.

Thoracic (chest) surgery is used to treat many conditions in the chest cavity, such as lung cancer and esophagus diseases. As a leader in technology, Doctors Hospital of Augusta offers da Vinci® robotic-assisted thoracic surgery, a much less invasive approach to the traditional thoracic surgery.

Traditional thoracic surgery requires a long incision through the chest wall, known as a thoracotomy. When using the traditional approach, there are some cases where the surgeon needs to cut open the breastbone at the front of the ribcage, known as a sternotomy.

The da Vinci® thoracic surgery is performed with only a few tiny incisions between the patient’s ribs, avoiding both a large incision and the possibility of having their ribs spread.

Traditional general surgery requires a large incision around your abdominal area, which comes with several drawbacks, like pain and a long recovery. However, our surgeons in Augusta, Georgia perform general surgery using da Vinci® technology to significantly improve clinical outcomes and recovery times.

Surgery is an effective treatment method when other remedies haven’t been helpful in treating conditions in the urinary tract or male reproductive organs.

Some urologic conditions include:

The gold standard treatment option for men under 70 with early-stage, organ-confined cancer is the surgical removal of the prostate using nerve-sparing radical prostatectomy. Prostatectomy is also the most widely used treatment for prostate cancer today in the U.S.

Traditional prostatectomy requires a surgeon to make an eight to 10-inch incision to access the prostate, which can cause substantial blood loss, a long recovery and a risk of incontinence and impotence. A laparoscopic prostatectomy does minimize the incision, but it only gives the surgeon a 2D image of the surgical site.

The American Institute of Minimally Invasive Surgery (AIMIS) has designated Doctors Hospital of Augusta as a Center of Excellence in Women’s Health Surgery.

A hospital can be recognized as a Center for Excellence once it meets minimally invasive surgery standards and outcomes as defined by AIMIS.

Retrieving location data...
Use my location
Or Use My Location
List Map 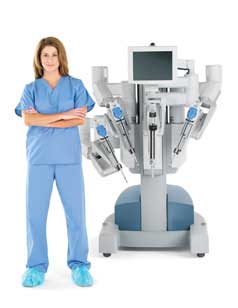