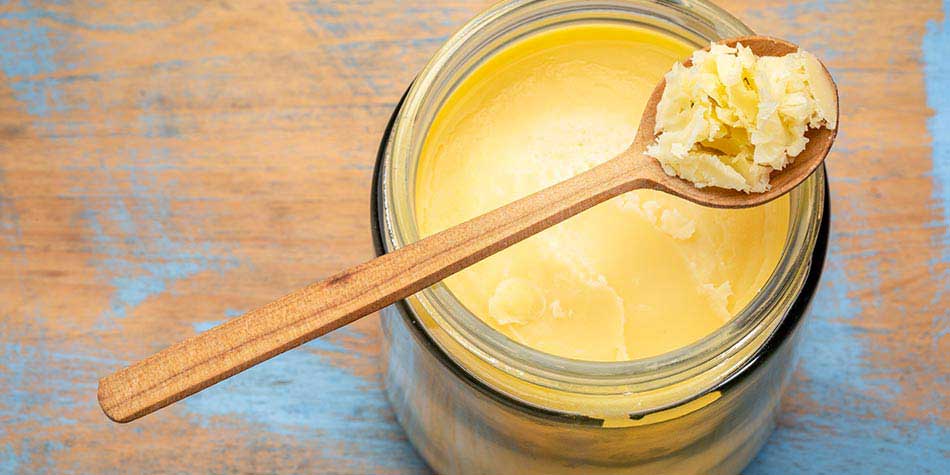 A number of diets, like the Ketogenic (Keto) and Whole30, tout ghee as a healthier alternative to butter. But ghee — which is a common ingredient in many Asian, particularly Indian, dishes — is actually similar to clarified butter. So, what’s the scoop?

The Keto diet suggests limiting carbohydrates while increasing fat content in order for the body to stay in ketosis and burn calories. Ghee or butter are suggested as staple cooking oils because the high fat content can help followers reach the 70 to 80 percent daily fat recommendation.

Meanwhile, Whole30 is a 30-day strategy that eliminates “inflammatory” and “craving-inducing” foods like sugar, grains, legumes and dairy, and replaces these with whole and unprocessed foods. Ghee is considered non-lactose, so it’s a must-have ingredient, too.

These two diets consistently rank at the bottom of the annual U.S. News and World Report Best Diets lists because they’re super restrictive and hard to maintain. Still, that’s probably not stopping you from wondering if you should take their ghee suggestions to heart. We did some digging to see what science says about ghee — the answer may surprise you.

What is ghee and how is it made?

Ghee has been used for thousands of years in Ayurveda, an Indian medical system with a natural and holistic approach to both physical and mental health stemming from ancient writings. In the Ayurveda practice, ghee is considered sacred and is used in many religious ceremonies, as well as in cooking. Despite its ancient history, ghee has recently resurfaced in the U.S. and beyond.

To make ghee, regular butter — usually from cow’s milk — is melted so the water evaporates, and the butter is separated into liquid fats and milk solids. The milk solids are browned and then removed. What’s left is complete milk fat, which usually has less lactose, a sugar found in milk, than regular butter. The golden liquid is able to withstand a higher smoke point — usually 485 degrees Fahrenheit compared to butter, which begins to smoke at 350 degrees Fahrenheit.

Is ghee healthier? 4 facts you need to know

Ghee sounds too good to be true, doesn’t it? Well, it probably is. The health claims are swirling, but there are very few studies involving ghee itself. Here’s what we do know.

Ghee is almost 50 percent saturated fat. This is unhealthy fat usually found in meat and dairy products. A diet filled with saturated fat can raise LDL (bad) cholesterol levels and in turn, up the risk of heart disease and stroke. Not to mention, the calories from saturated fat can contribute to weight gain.

The American Heart Association advises that no more than 5 to 6 percent of your daily calories come from saturated fat. But it’s best to opt for healthier fats like monounsaturated and polyunsaturated fats found in fish, olive oil and nuts.

You may not need the extra butyrate in ghee. Butyrate is a type of fatty acid that plays an important role in your digestive health. While you might have read that this makes ghee healthier, butyrate is actually made naturally in your gut; it’s unlikely you need more from fat.

Ghee does have less acrylamide. Exposure to acrylamide, a chemical that forms when some foods like potatoes are cooked at high temperatures, has been linked to cancer in animal studies. However, there’s not enough evidence linking acrylamide to cancer in humans. Plus, you’re more likely to get exposure from tobacco smoke than food anyway. The Joint Food and Agriculture Organization/World Health Organization Expert Committee on Food Additives does recommend more long-term studies on the topic.

Even so, ghee does have less of the chemical than other cooking oils, like soybean oil and unsaturated cooking oils.

There’s slightly less lactose in ghee. Both butter and ghee have minimal amounts of lactose. While ghee might have slightly less because most of the dairy proteins, like casein, have been removed, most people with lactose intolerance are okay with small amounts of either one.

If you’re super sensitive to lactose to the point that even butter upsets your stomach, you could try ghee as an alternative to see if there’s any improvement in your symptoms.

The ghee conversation is complicated. But if you’re wondering whether or not you should add ghee to your kitchen cabinet (no, it doesn’t need to be refrigerated), it’s best to reach for healthier forms of fat.

Choose monounsaturated and polyunsaturated fats like olive oil or sunflower oil instead of saturated fats like butter and ghee when you can. You can also reap the health benefits of good fats from foods like avocados, salmon and flaxseed — but remember that all of these foods and oils are high in calories, so again, make sure you’re eating them in moderation.

Occasionally using ghee may be fine for most healthy people as long as you’re not exceeding the recommended daily limit of saturated fat. However, if you have high cholesterol, you’ll want to limit the amount of saturated fat you consume. If you’re very sensitive to lactose and you miss indulging in that occasional buttery flavor, you could try ghee as an alternative.

Can a walk in the woods really make you happier?

July 15, 2019
Forest therapy is a traditional Japanese practice gaining fans around the world. Learn how walking in nature can ease your mind and boost your...
Previous Post

How to know if you have celiac disease, a gluten...

July 1, 2019
Not everyone who has a wheat allergy has to avoid other sources of gluten. Learn what gluten is and why some people can't have it.
Next Post
Back to blog home

Winter workouts: How to stay active and exercise safely

Should I Take Supplements to Strengthen My Bones?

Could I Have an Ulcer and Not Know It?